My friend Shanghai Sue is lucky enough to have a driver.  Getting around in Shanghai isn’t too difficult by taxi or subway, but having the chance to tag along with her when she has the driver makes all that work just to get from place to place seem like such effort.   I miss being able to hop in my car and run a few errands without having each stop become a major production.  Using the driver is more complicated than driving yourself—you need to plan ahead and make arrangements that include someone else being part of everything—but I don’t think I would want to try driving in Shanghai.  For now I am content to let Sue be in charge of transportation every now and then.

Today’s stop—the former French Concession (you have to say former or face the wrath of the Chinese government) and the Chinese Printed Blue Nankeen Exhibition Hall.

Sue has relatives that are into fabric and she wanted to check out the Chinese style indigo batik.  There is allegedly a museum with all the information you would need about the process of making the cloth and the history of nankeen in China, but we never managed to get to any museum.  Maybe because the lane we had to walk down to find the place looked like this. 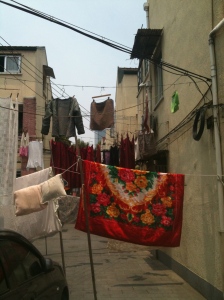 We pushed past all the laundry and wandered down the alley.  Sue’s driver had a difficult time finding the lane we needed so there was always that sliver of possibility that we were completely in the wrong place.  There had been a sign that seemed to say we were headed in the right direction, but when the alley got extremely narrow and the only indication that we should keep going was a handwritten sign all in characters, well, I was tempted to give up.

Sue:  “How is your reading these days?”

At one point Sue tried a random door hoping we weren’t about to burst in on someone’s afternoon bath.  Luckily, the door was locked and we avoided arrest for breaking and entering. 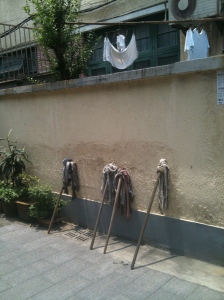 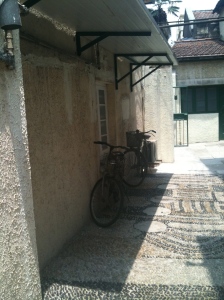 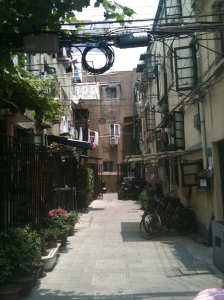 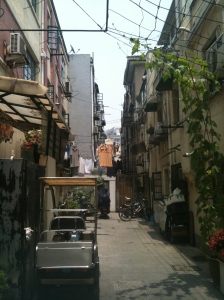 Suddenly we were in someone’s back yard with the most beautiful laundry you have ever seen hanging on the line.  After some confusion with where exactly the entrance might be, we were in!  We had found it! 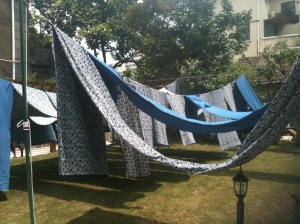 They have beautiful things, but I resisted making any purchases right before we leave for vacation.  Maybe next time… 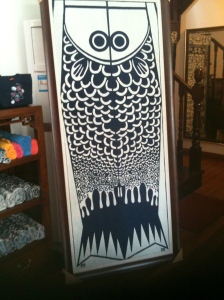 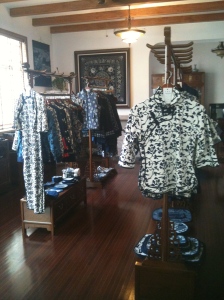 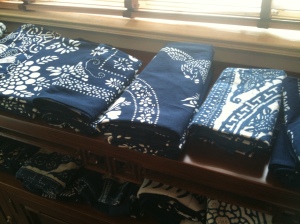