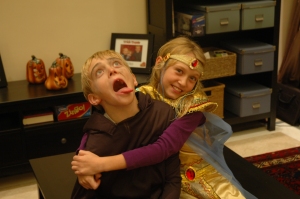 The kids got to trick-or-treat twice because while the North American parents thought we should hit the houses on the 31st, the management office thought we should all beg for candy on Saturday night.  Not surprisingly, none of my children complained!  Two nights of trick-or-treating thoroughly confused everyone.  Some of our Chinese neighbors had decorations up unaware that this meant kids would be ringing their doorbells looking for candy.  They certainly weren’t expecting it on two different nights.  Ava was surprised to be given three large grapes by one perplexed Chinese woman who apparently thought this was either the equivalent of a chocolate bar or better than nothing.    The kids were also less than excited by some of the other items that ended up in their bags.  Many, many things here are individually wrapped for no good reason which resulted in things like fancy looking prunes being part of our Halloween treat mix.

I planned ahead and made the kids pick costumes over the summer when I could order them easily.  There was less selection, but I didn’t spend weeks running around looking for things.  Henry was supposed to be a Power Ranger, but since he needed to dress up as a pirate for school (the reasons for this are still less than clear for me), he opted just to wear his pirate things for one round of trick-or-treating and his other costume for the Saturday round.  I try not to ask too many questions.

Other than the expected difficulties of missing our house and all of our Halloween decorating– this would have been a knock out year for our political jack o’lanterns!– the one thing that turned out to be the most difficult was the candy.  I had a hard time finding bags of candy and ended up traipsing around on the hunt for fun size candy bars.  I ended up with some questionable Chinese candy from the bulk bins at Carrefour mixed in with some teeny tiny Dove chocolate bars.  By the second round of trick-or-treating I had some bags of Chinese candy and a few of these cookie bar things.

How can you go wrong with “Classic Candy”?

It was the first time Lucas was able to go out in the neighborhood with his friends and NO ADULT SUPERVISION!  Are you surprised that this resulted in one kid needing stitches on his face?  Of course you aren’t!  Luckily, it wasn’t Lucas but one unhappy family had to make a Halloween trip to the Chinese hospital.

Ava and Henry went around the neighborhood with a friend since Mark was delayed at work.  I handed out the candy and actually missed the days of Hawthorn Road with the fog machine and the glow in the dark eyeballs.  The kids came home to sort their loot and ate the imported candy first, followed by the Chinese candy made by foreign companies.  Now we are down to the Chinese candy that none of us recognize.  Almost half of these experimental tastings result in a run to the nearest trash can.  At least their dentist can’t complain.