The dangers of traveling in China.

We finished Golden Week here in China in October, which means that once again Team Erickson hit the road to experience something other than Shanghai for a few days.  Mark usually has to work over Chinese holidays.  Like our trip to Beijing last year, this trip was short.  It turns out our sweet spot for travel within China is around 4 days, so our trip to Guilin turned out to be perfect.  Whenever I told any of my Chinese friends and colleagues that we were taking the kids to Guilin, I was met with positive responses.  People thought we were going to love Guilin!  It was beautiful!  So interesting!  When I mentioned it to my mother she had also heard great things about the city from the other people on her Chinese tour last year.  Not to disparage either of these groups, but my mother had pointed out—several times!—that the other travelers on their Chinese excursion were “older.”  And sometimes the recommendations from our Chinese neighbors are not always on par with the things we love in a travel experience.  So we basically had universal approval from the Chinese and the elderly.  Yet we continued on with our plans!  This either demonstrates that we are unable to see danger when it is staring us right in the face, or that we are too lazy to make changes once we realize our plans might be less than ideal.  Either way, in the real world, our entire family would have long ago been eaten by a Yeti or swallowed by a whale.  But it turns out Guilin isn’t the real world!  Sometimes Team Erickson gets lucky.

We anticipated having to run to catch our flight, but were pleasantly surprised when the flight was delayed just enough to let us buy beers (for the adults) and snacks (for the kids) before boarding.  We had decided to stay for one night in the city since we would be arriving late.  Mark and the kids spent the taxi ride (trunk open and our luggage flapping in the breeze) chatting with our driver in Chinese.  Even just on the drive from the airport we could see some of the land formations that make Guilin famous.  Already we had exceeded our expectations!  Our hotel had been highly rated on Trip Advisor, but was less than ideal.  Lucas actually called it “seedy” (a look in the bathroom at the numerous sexual aids confirmed this) and questioned its cleanliness.  I was forced to shock the children with anecdotes about our traveling experiences before they were born.  Sufficiently frightened, they all went quietly to brush their teeth.

Delicious, but not nutritious.

There was a night market where Mark and I would have normally found ourselves before children, but on this trip it was Mark and Lucas who went exploring while I stayed in the room and watched the craziest singing competition on television.  Did it ever occur to you to sew a million fake flowers onto a dress shirt?  Or to cut a suit in half and then just wear it that way?  People apparently do these kinds of things on Chinese television.  When Mark returned with bottles of water and spicy peanuts, we were ready to call it a night.

The next morning we cobbled together a breakfast of various items for sale from our local street vendor near the hotel.  This is Mark’s dream breakfast and the kids always start out keen to impress him.  They will still try almost anything although their enthusiasm for mystery items is starting to wane.  They have now had more than a few bad surprises when it comes to food in China—errant bones, things that turn out to be pickled, insects and reptiles—and they are more cautious now.  Only Lucas managed to eat most of what he picked out. 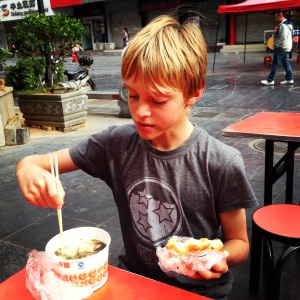 The morning consisted of sight seeing and we made quite a stir in Guilin.  Once again the tiny troupe of blond imps caused a commotion as we walked around the town. We tried to walk around Elephant Hill.  We still have no idea why it is called Elephant Hill, there were probably signs that explained this, but we were too busy clogging up the entrance to be bothered with learning anything. 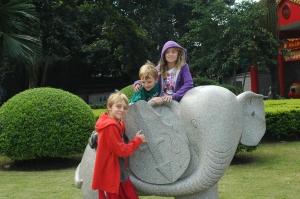 People had been commenting on the kids as soon as we left the hotel and by the time we got to the park the other tourists were secretly taking photos of us.  When it became common knowledge that the two older kids were available for pictures and could speak Chinese, there was a rush to get the best spots near them.  Henry is still adamantly opposed to having his picture taken with random Chinese people no matter how nicely they ask so he spent the first 20 minutes snarling and snapping.  Mark sat on a bench to wait it out and I tried to get a few photos of the giant goldfish swimming around the little bridge we were standing on. 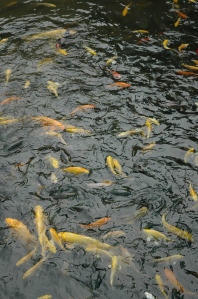 You can see how this could go terribly wrong, but usually people are fine.  It is China, so the kids get manhandled a bit, and no one can believe I have three children.  They desperately want a photo of all the kids together, but Henry always refuses.  Mark is usually the one to decide he has had enough and to make us all move along.

After lunch, it was time to move to our real accommodation.  I will let you in on a little secret—Team Erickson has discovered the best thing ever!  Those of you who have known us for a long time will remember Mark and I going on adventurous trips.  India!  Vietnam!  Cambodia!  Mark would just buy plane tickets and off we would go.  We never had reservations.  Never had much of a plan.  Oh, how the mighty have fallen.  Guilin has a new Club Med and that is where we stayed for the remainder of our time.  I didn’t have great expectations.  The Erickson kids usually hate any “Kids’ Club” kind of thing.  They might try it out, but ultimately it is mom and dad who end up entertaining them.  But this time they loved it!  They stayed all day!  They did archery, swung on a trapeze, and ran around with other kids.  We ate Western food and sat by the pool.  Not really “Chinese” maybe, but we will ignore that.  There were Chinese people there—does that make it more “authentic”?  Ok, I know it doesn’t.  But when we arrived at the resort even the kids visibly relaxed a little bit.  There is something to be said for making things easy.  And we all had a great time.  I welcome your scorn!  Feel free to pile it on.  A younger, kid free version of myself would have been appalled, but she never had to travel through Asia with a group of squabbling children.  The younger me would never have survived travels with the Erickson children.  She could not have imagined the planning and energy it takes to wrangle kids on a normal day much less while vacationing internationally.  So the older and wiser me took the kids to Club Med.  We can aim for authentic Chinese next week.  I am pretty sure I know where to find it.

Henry has a store!

Still short enough to get in free– but just barely.