Twenty years from now you will be more disappointed by the things that you didn’t do than by the ones you did do. So throw off the bowlines. Sail away from the safe harbor. Catch the trade winds in your sails. Explore. Dream. Discover.
–Mark Twain 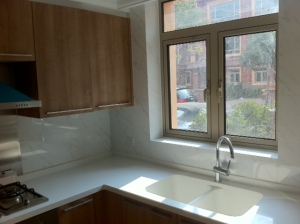 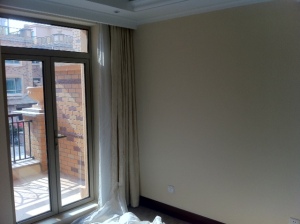 Mark took pictures of the new house and he took only corner pictures so every single picture you see is a corner picture of the house.  I still think he was trying to make side pictures, but instead he made corner pictures.  The house looks nice.  It is a little town housey, but I’ve got to get used to it.  I am not sure what China is going to be like because I have never visited.  I am not sure what is ahead of me and stuff like that.  I had to say bye to our minivan because we had to leave it in Georgia because of the moving.  I was sad, but I had to do it.

So far there has been lots of chatter about the decision to bring the dog to China. There have been some vocal opponents and some serious supporters, but in the end bringing the dog was something that we thought we really needed to do. Yes, I have heard that they eat dogs in China and, yes, there are restrictions on the number of dogs you can have and some rules about when those dogs can be out. Maggie is a big dog, around 65 pounds, and she is a bit of a barker so she isn’t going to fit in well in China. She is also black which I am told might make her seem more menacing to the locals. She is basically a Baltimore street dog– a lab and pit bull mix, we think– and she is perfect for living in the city if you want people to be afraid to come too close to your porch if they don’t know you. And I for one, greatly appreciate that in a dog.  She can look scary, but she is great with kids. We have had her since she was 6 weeks old when our babysitter’s husband found a box of puppies at a city construction site. Yes, someone had dumped a box of puppies and the only one that survived is Maggie. It is expensive to have her come with us, but Henry stood firm in his assertion that without the dog he would be staying in the United States. He had only two requests and those included the shipping of his bed (not happening, but we did send his quilt, pillows, and sheets) and the necessity of his dog. It is a hassle, and I know that it is going to be me dealing the most with the dog issues, but in the expat compounds a big dog isn’t that unusual. We have a place to walk her and the kids might really need a good doggie snuggle those first few weeks in our new home. I think I might be getting some doggie snuggles myself when I need them.

So, the low down on how this dog shipping thing will allegedly work… Maggie travels separately and arrives after us. I have had to buy an ENORMOUS travel crate for her and she will be taking a pet friendly airline. She goes to Europe first and gets a chance to stretch her legs and have a snack, maybe hit the bars in Amsterdam, and then takes another flight to get to Shanghai. While the long flight was a big concern, we were more concerned with the mandatory 7 day government quarantine that all dogs are supposed to endure when they come into the city. With the company we are using they are allowed to keep her for 24 hours at their facility and then return her to us. All in all she may have a better trip than the kids.

The pet relocation company is very serious about keeping you informed. I know people worry about their pets and that it was all meant to reassure me, but I had to work really hard to keep the sarcasm to a minimum.  My first agent there made it clear that I could track the dog online the entire time she was traveling and had access to his cell phone “24 hours a day, 7 days a week”. I love the dog– but I am not that kind of pet owner. I am also going to be pretty busy taking care of the three little people who will be traveling with me. They, of course, might feel differently and need to make several late night phone calls to check on Maggie Moodles.  I hope our agent doesn’t mind speaking with Henry.

Hopefully, the dog will arrive safe and sound in Shanghai and we will all live happily ever after. You can stop laughing now. Of course there will be a glitch, but maybe, just maybe, it will just be something minor. Keep your fingers crossed. And you have to admit, it makes a great story. The dog goes from being dumped in the trash to traveling the world or, as some writers I know suggested, From Dumpster to Diplomat. She will have two stamps in her passport!  (No she doesn’t really get a passport.)  The kids will be chronicling the adventures of Maggie for sure. Unless it is from Dumpster to Disaster… or Deportation…

I wish Daddy was here.  Like in the olden days.

I’m not quite sure what’s going to happen to Maggie when she is leaving.  I wish I was with her every single part of my life.  I wasn’t with her before we found her, but you get what I mean.  I don’t know if this is going to be an exciting adventure for Maggie or not.  I bet she’s going to be nervous because she’s never gone on a plane.  We picked a very friendly pet service.  I am going to be without Maggie for three days!  I can’t believe it!  It feels like the move is never coming.

This is a very scary experience for me because I’ve never moved at all.  Oh, and by the way, did I mention that I have two brothers?  Oh wait, and also a dog?  Now back to the post… I’ve been worrying this whole time about what China will be like.  Will it be different in a good way or a bad way?  Oh, and did I mention that the school I am going to go to has uniforms?  I am sooooo excited.  And that was totally sarcasm.  As I was saying, I don’t like the uniform one bit.  They even have different uniforms for different subjects.  Anyway, I like China but I don’t like the uniform.  The school were I go now doesn’t have a uniform.

We are going to see a lot of great things.  I wish that we could stay in Baltimore.

I am excited to move to China.  I am glad I get to bring my dog, Maggie.  I love Maggie.

Im physically ready to move. But I still feel like were not going to move. When moving day comes, I’m going to go crazy! X_X I’m not ready to move. I’v been living in this house for my whole 9 years. Even in 3rd grade I never thought I would move. I think if my parents had prepared me for the fact that we would maybe move some day, I would be a – a lot more mentally ready. It would also help if I had a say in the matter but when my dad got offered the job, he took it and told us all we were moving to China! China is on the other side of the world! I’v lived here my whole freakin life! I didn’t even have a say, I haven’t even visited China, and they never told me that there would be any reason we would move! I love my school, I don’t want to leave my friends, and It’ll be so hard to move! Well, theres nothing that’s gonna stop us from moving now, may as well stop jabbering. Mom and dad do have a good reason though, dad needs a good job. When Erickson went bankrupt and we sold it, everything went wrong.

As a 7 year old girl with no experience of moving at all, this is a very exciting experience for me.  It is my first time moving ever, ever, ever in my entire life.  Mommy is very stressed about getting us ready. It is almost as if she is in a holding pattern waiting for something to pop up in excitement.  I’m excited about what’s coming next.  It almost feels like this is just a dream.  I feel stressed.  I also feel like I’m climbing a mountain that will never stop.

My mom did say “The kids are both excited and terrified” but then she informed me that instead of 3-5 years in China, we may stay 3-SEVEN years. She also said we may move to a lot of different places after China. Colorado, Australia, etc. As a nine year old boy whose LIFE depends on the computer and the internet (as we have no t.v., wii, etc.) im gonna be without computer for a long time. Im gonna miss all my friends but there’s always Skype lol ^_^ but im not so sure im going to feel at home for at least six months. Lego Universe is closing down and that was my fav game at the moment. It was the best game iv played. Its shutting down on January 31st 2012 because their target audience is 9-13 year olds and less than half of the 2,000,000 players are their target audience less than half of the people who r their target audience r members. 😦 goodbye LU.