In Shanghai we keep accumulating more pets.  First there was Ming Ming the street kitten, adopted under duress.  Lucas had been begging for a cat and so China obliged by letting a stray have a litter of kittens in our utility closet.  For once I was ahead of the game and after I encouraged all the neighborhood kids to peek at the kittens over and over, the mama cat finally wised up and moved them all as far away from Team Erickson as possible.  But China is not easily outsmarted; so early in the spring another brand new kitten appeared, crying and helpless on our neighbors’ sidewalk.  Lucas was loading the poor thing into a box before any of the other neighborhood kids even had an idea that there might be an available kitten.  I will admit that I went soft.  She really was cute—so tiny and helpless.  Even once she started growing like crazy she was still pretty adorable.  Evidence: 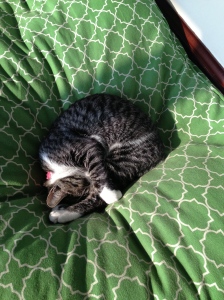 Mean as a snake.  Oh, Ming Ming is still cute, but after we left her with only the dog and the ayi for company all summer long she has developed some issues.  She loves the dog with an unnatural passion, for one, and she barely tolerates people.  Her favorite activity is hiding in random shopping bags and launching herself at unsuspecting children.  After Ming Ming the Terrible, I vowed that we were done with pets.  This, of course, is like daring the universe to drop something in your lap.  And being in China, you know it won’t be your ordinary kind of thing, right?  The kids were begging for a rabbit so what did China decide to let loose all over the neighborhood?  Bunnies, of course! Well played, China.  Well played.

The specifics aren’t important, but let’s just say they involved Chinese New Year fireworks, multiple neighbors chasing rabbits, and, ultimately, the Erickson children bringing one of the escapees into our house.  This time I stood firm.  No rabbit.  Mark was less steadfast.  We now have a bunny.

The important thing here is for us all to realize the ultimate silver lining.  Yes, I have an extra pet to house and feed.  Yes, I am yelling constantly about the care of the rabbit.  But without the rabbit I would never have had the need to go to a Chinese pet supply store!  I would never been able to compare the ease and reliability of yet another American institution to the haphazard unpredictability of a Chinese one!

Yes, over the Chinese New Year holiday I found myself trekking across the river to go to one of the bigger pet supply stores in Shanghai.  I would love to say it came highly recommended, but a tepid and reserved recommendation was enough for me.  Rabbits need stuff, apparently, and our local pet shop did not have anything even resembling rabbit supplies.  No matter!  There are other places with the things we need!  And so off I went to Pet Zoo.

I can see why you might be thinking that Shanghai’s Pet Zoo is like Pet Smart or PetCo in the United States.  You would be wrong to think this.  Does Pet Smart feature disco lighting?  I think not.  Does PetCo have the feel of a post apocalyptic 7-11?  No, it does not.  Only Pet Zoo can achieve these things.  Only Pet Zoo.

Upon arrival I was surprised that I needed to take an elevator up to the store.  I was even more surprised to see this sign in the elevator: 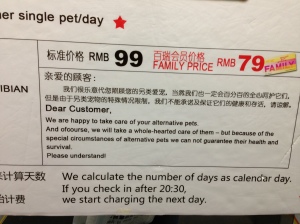 Points for honesty, I suppose. Do not bring your exotic pet for boarding at Pet Zoo if you expect it to be alive when you come to pick it back up.  Consider yourself warned.

There are pets for sale at Pet Zoo in case you want to pick up something to replace the iguana they were unable to keep alive for you during your trip to Thailand.  I thought about taking a few photos of the cats they had labeled “Garfield” except the amount of cat snot on the plexiglass obscured their snarling little faces.  I also refrained from photographing the various rodents and such they had in open bins at the back of the store.  The rabbit food and hay was back there, so I looked around as I picked up my things.  The hamsters, guinea pigs, and rabbits are all in these plastic enclosures.   I assume this encourages lots of little hands to sample the merchandise.  As I passed the guinea pigs, they all began making a horrible racket and only stopped their squeaking when I clucked my tongue and shushed them.  I am the guinea pig whisperer!  My elation at my new found powers did not last long, however.  I turned my attention to the hamsters and discovered a terrifying truth about PetZoo.  The hamsters were all burrowed into the cedar shavings when I looked into their little cage.  You know how sometimes it looks like animals are dead but they are really just sleeping?  This is not always the case at Pet Zoo.   Sometimes they are really just dead.  Sometimes you can be sure of this because their front end is missing.

I would like to take a moment now to remind you that all the things on this blog ACTUALLY HAPPEN.  I wish I was making this part up, but Pet Zoo had only the back end of a hamster in one of those cages.  How he got that way I am not sure, but I am pretty confident that the other hamsters knew something about it.  He had been there for a while—long enough for his pitiful little rib bones to be dry and for there to be no sign of anything bloody.  The kids were appalled that I didn’t make a huge scene in the store, but come on!  No matter what the staff said it wouldn’t have made a difference.  Either they knew about the hamster murder and ignored it or they didn’t have any idea about their cannibal hamsters.  Six of one, half a dozen of the other.  You say potato…  Sometimes you decide to just pay for your rabbit food and get out while the getting’s good.  On the up side, I am pretty sure Pet Zoo would be willing to sell you a half price hamster.  (Sorry, I couldn’t resist.)

Remember when I described the meat section of Carrefour? How the meat is in these big open bins and you choose the pieces you want? Here is more proof that I am not crazy and that Chinese shoppers value “creative” solutions to problems. Enjoy!